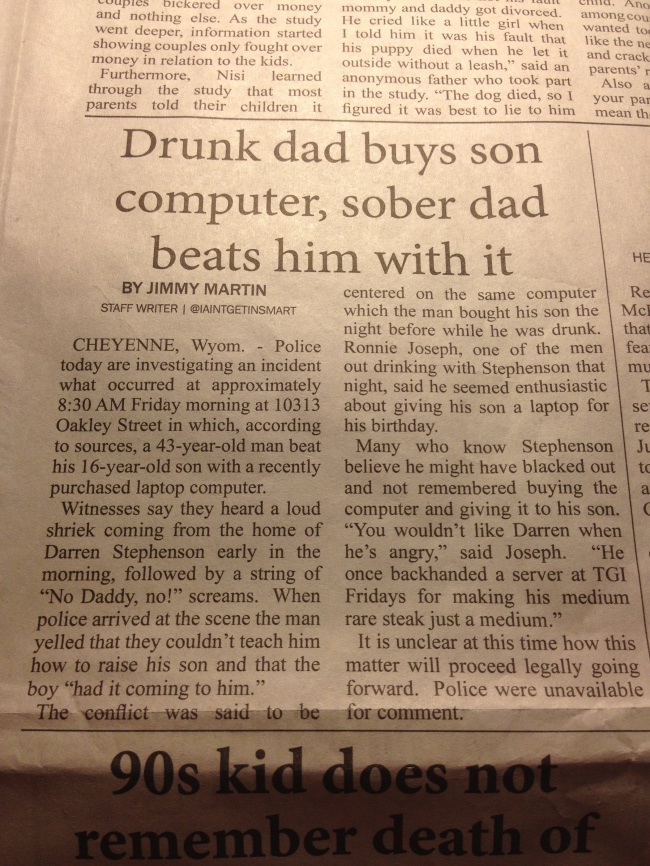 Those headlines were not even what inspired me to write this article. No, the headline that I found the least humorous appeared in bold print on page 5: “Drunk dad buys son computer, sober dad beats him with it”.

Where to I begin? Obviously, child abuse is never funny. No sentence in the article was even a little bit funny.

It told the story of a dad who beat his son with a computer that he had recently given him as a gift. The article then attempted to joke about the abuser’s anger, saying, “He once backhanded a server for making his rare steak just a medium.

I really fail to see any humor at all in the story. I don’t think it is ever appropriate to joke about child abuse, but it is especially problematic that it was written in a Penn State publication.

Have we already forgotten the terrible abuse that occurred in our own institution? I find it appalling that any writer or editor who is a student at Penn State would find it appropriate to publish a joke about something that occurred so close to home.

We should definitely not be making light of child abuse by trivializing it and making jokes about it.

As Penn State students, we should feel a responsibility to try to stop child abuse and help any affected victims.

Did I mention that Phroth is funded by UPAC? That means our student activity fee is going towards a publication that thinks its okay to joke about child abuse.

What do you all think about that? Does a ‘humor’ magazine get to make offensive and problematic jokes if it is under the guise of comedy? Do you think its okay that UPAC funds Phroth considering what stories they’re publishing?